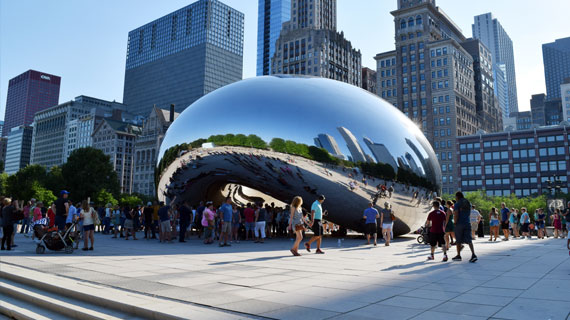 Chicago, on Lake Michigan in Illinois, is among the largest cities in the U.S. Famed for its bold architecture, it has a skyline bristling with skyscrapers such as the iconic John Hancock Center, sleek, 1,451-ft. Willis Tower and neo-Gothic Tribune Tower. The city is also renowned for its museums, including the Art Institute and its expansive collections, including noted Impressionist works. In 2014, Chicago attracted 50.17 million domestic leisure travelers, 11.09 million domestic business travelers and 1.308 million overseas visitors.[166] These visitors contributed more than US$13.7 billion to Chicago's economy.[166] Upscale shopping along the Magnificent Mile and State Street, thousands of restaurants, as well as Chicago's eminent architecture, continue to draw tourists. The city is the United States' third-largest convention destination. A 2011 study by Walk Score ranked Chicago the fourth most walkable of fifty largest cities in the United States.